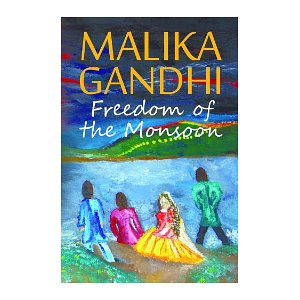 Malika Gandhi, author of Freedom of the Monsoon, is a writer who’s chosen the indie route after being denied the traditional route.  She talks about her book and all the work she did to learn how to self-publish the right way.

Ever wondered what your life would be like if it was suddenly turned around by one thought, one action?

Ever thought you were safe?

Ever sacrificed in honor of your country?

1942 saw the beginning of an Indian ‘war’ against the British Raj as Mohandas Karamchand Gandhi’s cry of Quit India was felt across the subcontinent of India.  Meet Rakesh, Dev, Pooja, Amit and Sunil; five individuals with their own story to tell.

Read how they fought, sacrificed and hoped for a ‘Free India’ as they struggled against the horrendous happenings of the Independence Era.

2. What motivated you to become an indie writer?  Have you been traditionally published?  Why or why not?

Like so many, I tried the traditional channel of becoming published and like so many, my manuscript was declined as the clientele lists of the publishers and literary agents were full and couldn’t possibly take on any more.  Taking a step back I reflected on what to do – keep trying to have my manuscript accepted or try self-publishing?

My editor, John Hudspith (see his website, kimissecret.wordpress.com), pointed out the benefits of going down the indie route.  The more I researched into this, the more I became convinced to try this.

Becoming an indie writer was like a breath of fresh air which gave me the opportunity to have my book published far quicker than going through the traditional route.

3. How have you liked self-publishing so far?

I find self-publishing exciting.  It is a beautiful journey into one’s creative ability.  It is hard work but which comes with self-satisfaction.