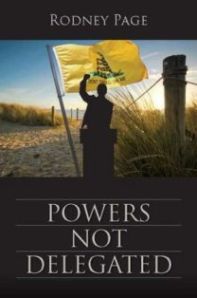 Rodney Page first published a book in 2005, and seven years later has learned just how much the industry has changed.   Learn about the hybrid indie publisher he went with and which vendors he chooses for his marketing efforts.

Powers Not Delegated is a fast-moving political thriller set in current times. The reader will recognize many national challenges and circumstances in the book; they are based on reality.  And, though fiction, the book highlights the type of leadership and policies we, as a country, must embrace to effectively overcome those challenges.  The characters are vivid representations of the best and worst we have in our political system today.

Honestly, I first tried the traditional route for Powers Not Delegated, but soon learned the publishing landscape had changed dramatically since 2005 when my business book was published.  I was determined to get the book published, thought it was pretty good and that a large market existed for the genre and theme.  I researched the various self-publishing models, paying close attention not only to the relative costs, but the processes themselves; what I could do myself and what I would have to contract.  When it was all said and done, and I assessed my skills, I settled on a hybrid indie publisher.