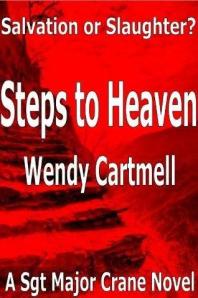 Wendy Cartmell is a British crime novelist who recently published her first book, Steps to Heaven, on Amazon (also available on Amazon UK).  She’s had a fair amount of experience sending out query letters to agents.  In this interview she discusses that along with her book and other marketing efforts.

Steps to Heaven is the first book in the Sgt Major Crane series.  Crane is a Special Investigations Branch Detective in the British Army, based at Aldershot Garrison.  He is disturbed by the horrific case of a soldier called Solomon who, after recently returning from Afghanistan, murdered his wife and 6 year old son and then committed suicide.  It seems Solomon was attending a local church which encourages people to join by offering salvation to its members.  But as Crane investigates and the body count rises, events take a darker turn and he wonders what the church is offering – salvation, or slaughter?

My inspiration for the Sgt Major Crane novels has been my love of crime writing (which I read voraciously) and my husband’s 22 years of service in the British Army.

I have sold around 50 copies so far over three platforms.  I have nothing to judge this against though so I don’t know if this is good or bad for the first month of publication.

3. You’ve sent query letters to literary agents.  Describe that process – how do you find them and what do you say to them?

I sent query letters out to a host of agents about Steps to Heaven.  I found them through Writers’ and Artists’ Yearbook.  The query letter gave a blurb about the book, similar to that found on a book jacket, and the remainder of the letter gave brief details about me and my background, linked to the book.   The majority ignored me but I had two agents request the full manuscript: Peter Buckman at the Ampersand Literary Agency and Becky Bagnall at Lindsay Literary Agency.  Both were interested in the central character Sgt Major Crane, the setting of the British Army and the plot.  But both seemed to have trouble with the voice and also selling the book into the crowded field of crime.

So, undeterred, I wrote the second novel, 40 Days and 40 Nights, and sent that round to agents.  But this time no one wanted the full manuscript at all – not even Peter or Becky. Then one day I read a book called Messiah by Boris Starling.  I’d seen the TV shows but never read the book.  To my amazement it was written in the third person present tense and I realized that this was a way to find my “voice.”  As soon as I started rewriting Steps to Heaven, the book came alive, more immediate and more powerful.

So how to get it published?  I couldn’t face sending it out to agents again.  Friends of mine were looking at self publishing via independent printers but they were being quoted hundreds of pounds that I couldn’t afford.  So I decided to self publish electronically.

4. You’re relatively new to self-publishing.  How do you like it and why do you do it?

At the end of the day it’s not about the money, it’s about the stories.  I just want people to read them and hopefully enjoy them.  I realize I’ve only just started out with the publishing process.  I am finding out just how time-consuming the whole process of self publicity is and how long it actually takes for people to decide to buy, then actually buy, then get around to reading your book and finally giving you a review!  It’s also been difficult getting friends to take you seriously.  If you manage to persuade them to download the book, you then have to persuade them to actually read it!  I then started to get comments like ‘I’m very surprised, but I’m really enjoying it’ or even worse (or is that better), ‘Oh it’s just like a real book’.  I realize now that to them I am just a friend who writes, not an author!

Having said all that, at least this way there is an end result to show for all my efforts – any reaction is better than a manuscript sitting on my laptop not being read by anyone!

5. What sort of marketing techniques have you used to sell your book, and which ones have been most successful?

It’s taken me over a month to get my head around Facebook, Twitter, building and publishing a website, joining in Kindle communities, reading blogs as well as writing one, finding reviewers who will put my book on their list, joining LinkedIn and Goodreads, arranging author interviews, and writing and sending out press releases.  It’s going to take even longer to build up relationships and hopefully a following.

I think three things have been most successful: press releases out to my local community have helped sales; my own website which I mention at every opportunity gives me a presence out there; and finally, Twitter.  I had never tweeted before in my life and now tweet and re-tweet with the best of them!  Through building a following on Twitter I have found fellow authors who want to read my book, built up a list of friends on Goodreads and get to find out what my favourite crime authors are up to.  Anne Cleave even wished me happy birthday last week – so I must have arrived!

6. Are there any marketing techniques you have intentionally avoided or discontinued, and if so, why?

I have deliberately avoided blogs or websites that make you pay to join them or only sell advertising space or make you pay to get a book review.  I don’t think anyone needs to pay for these services.  However, I am happy to make a donation to a really good blog.

You have to be able to sell yourself.  I am naturally not a pushy person.  I always said I couldn’t sell anything or negotiate a deal.  My daughter is a fantastic sales person, but not me.  Now, I have to not worry about that and promote myself and my books as often as possible.  But in a good way, by offering help and advice as well as promoting my book, as the blogging and Twitter community don’t like those who only join to sell their books.

8. Independent authors face the obvious challenge of marketing their books without the resources of traditional publishers.  What advice do you have for an indie author just starting out?

It’s a lot of hard work and very time consuming.  For the past few weeks I haven’t been able to do any writing at all as I have been concentrating on the marketing side of things.  When my head is full of my list of things to do to market my book I just can’t be creative and step back inside Crane’s head.  But it’s also very rewarding.  Every sale you get is through your own efforts and I have learned a lot. The best feeling ever is when someone comes up to you and says ‘I love your book’.

9. What projects are you currently working on?

The novel 40 Days and 40 Nights is in the final stages of editing, which I hope to publish early January although the date keeps changing!  I have also outlined but not yet started writing a third as yet untitled novel which will be on the subject of rape.  All of my novels are Sgt Major Crane investigations.

10. If you could market your brand – not just one particular book, but your overall brand of writing – in one sentence, what would it be?

One thought on “Wendy Cartmell”