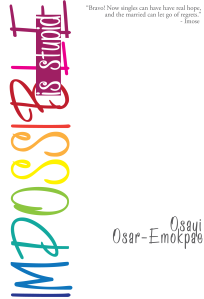 I was surprised recently to learn that I was not the only person where I work to recently self-publish a book.  That’s when I met Osayi Osar-Emokpae through a mutual friend.  I decided to find out more about Osayi’s book, Impossible is Stupid, and her experience with self-publishing.  So what better way than one of my interviews?

It’s Thanksgiving Day as I sit here responding to this interview question. The plan was to go to the gym in my apartment, then come back and respond to this email, but my plan didn’t quite work out that way.  On the way from the gym I was stopped by a random woman in my apartment. She asked me to escort her and her boyfriend to her apartment because she was nervous that he was violent. He seemed harmless, and I didn’t want to get involved, but I asked God, and felt Him telling me to go with her.

When we got to her apartment he kept talking about how peaceful he was, and I could see the tears streaming down his face, and all I could think was how did I get myself into this mess?  If anything, at least I would be a witness for him to prove that he did not hurt her. So one minute he is telling her that he can’t believe she brought me into their situation, and the next minute I hear her screaming and he had her in a grip hold and was punching her in the face, pummeling her as hard as he could.  I could see blood, arms flailing and things getting knocked around. And all I heard was screaming and more screaming.

I did the only thing I could, I quickly walked away and called 911 as fast as my fingers would allow me.

While talking to the police I found out that she was 40 years old, she had started dating the man in August of this year, and they started living together not long after that.  Not only was he unemployed, but he had a record…for assault!

My book just came out in the last week, and I’m expecting the Kindle version to be out any day now, so I have no sales yet.  But those who have read the book have enjoyed it, and many are waiting for the Kindle version.

3. Describe your experience with traditional publishers (if any) and how it compares to self-publishing.

I never used a traditional publisher because I did not want to play those games.  But self-publishing was challenging for me because at first I decided that I was going to do everything myself.  So by the time the book was finally out, I was exhausted.  (I made a video, designed the cover, wrote the book, contacted reviewers, etc.)

4. What sort of marketing techniques have you used to sell your e-book, and which ones have been most successful?

I’m just starting marketing, and I’m planning on doing a lot of guest posting.  My aim is not to sell the book, but to spread the idea, so I don’t mind giving copies away to do that.  I know the money will come eventually, but the main thing is just getting women to know that they are valuable.  It’s what keeps me going.

5. What’s the most important thing you’ve learned about self-publishing that you didn’t know when you started out?

6. If you could do one thing differently in publishing your books, what would it be?

I would let other people do what they do best so I can focus on what I do best.  I think I could have launched the book a bit better if I had focused my energy on the writing and the publicity which is what I love, instead of everything else. For my next book, I will definitely get others to help.  (Although having help has its own challenges, since you have to trust people and learn to communicate your intentions well).

7. Independent authors face the obvious challenge of marketing their books without the resources of traditional publishers.  What advice do you have for an indie author just starting out?

My advice would be start a blog with a focus on whatever you’re passionate about.  Find the leaders in your niche, follow their blogs and make valuable and interesting comments, then eventually ask to guest post.  That’s gold!

8. What projects are you currently working on?

I’m working on a book about guilt.  It’s supposed to help young women realize that although God loves us and His love never changes no matter what we do, the guilt we feel when we sin can really destroy us.  It’s going to be a creative collaboration, and I’m really excited about it.  (Hopefully it will be the beginning of a series of creative books like this one).

9. If you could market your brand – not just one particular book, but your overall brand of writing – in one sentence, what would it be?

God really loves women, He smiles whenever He thinks of us, and He keeps pictures of us in His wallet.

10. How can readers learn more about your books?