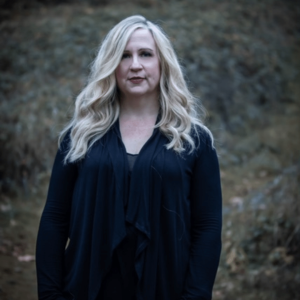 Tracey Shearer is a hybrid author with experience in both the traditional and self-publishing worlds. Learn more about the unique, reader-driven efforts she’s used to promote her books.

1. Tell me briefly about your latest book – what is it about and what motivated you to write it?

My latest book, Raven, is the second book in my Entwine trilogy. The trilogy is about three women with incredible gifts. Each book focuses on one woman, but all continue throughout. The trilogy is fun, but it also covers important themes such as friendship, sisterhood, acceptance of yourself – good and bad – and where there’s love, there’s hope.

In Raven, Kate is a widow with two young daughters living in a haunted Scottish B&B. She has a vision which reveals the existence of a black-ops military group who is determined to unlock the special gifts of people just like Kate through horrific experimentation. She’s got to trust in herself and her abilities to have any chance of success because if she doesn’t, she’ll lose those she loves. One of the other storylines throughout is whether or not she’ll open herself back up to love again. Of course, I have two hunky choices for her to consider. Haha!

Like with Entwine, the death of my parents motivated me to write and create a ghostly realm and to explore what happens when we die. My battles with cancer also motivated me. My most recent bout was in February before COVID hit. I know what it’s like to struggle with not being in control and also the incredible power of friendship. The support I have has really gotten me through all the surgeries and radiation.

I only have one book out, Entwine, and from everything I’ve read, I’m beating the indie author average – yay! Based on the reader support and excitement over the Raven release, I’m expecting to match or exceed Entwine’s sales as well. Plus, I did put together a killer book trailer for Entwine that has already generated some sales just recently. I’m learning more and more as I go along on this writing journey.

3. You’ve chosen self-publishing. How have you liked it so far? Talk about some of the positives and negatives you’ve encountered.

I had an agent who had to retire to take care of her hubby while she was trying to sell Entwine. Then I received a publishing contract from a small press that I turned down for being too restrictive. I decided to form my own publishing company and publish myself. It was the best decision I could have made. Having that control has been so wonderful. And getting my book out there rather than waiting another few years to go the traditional route has allowed me to build a readership right away.

I have a new agent that wants to work with me on another book and she told me she was so happy I self-published Entwine. She said she would have had to tear it apart to make it fit a publishing box to sell it. Because Entwine has elements of fantasy, suspense, thriller, mystery, romance, and the paranormal, it didn’t fit neatly into a publishing box. But she loves my writing, so she wants to work with me on something else.

Self-publishing doesn’t hurt your chances for being traditionally published on the level it used to. So many authors are going the hybrid route. The business end of things that I’ve learned about will make me an excellent author for a traditional publishing house down the line because I understand about social media platforms and followings, promotion, etc.

4. What sort of networking have you done as an author, and what have been the results?

My Twitter following of over 29,000 has been incredible for networking. I’ve met so many amazing authors through Twitter and it’s a supportive bunch. I’ve just started to focus on Instagram, so I’m seeing an influx there.

Before COVID, I was a regular at the local writer’s conference here in Seattle, the PNWA Conference, and that allowed me to meet many authors in person as well. I find we can learn so much from each other. And there is always more to learn!

I also formed my Facebook writing group, Motivated Magic Writing, and that has also gathered more writers together and others who just want to learn to use their words more effectively.

5. Talk a little about the sort of marketing techniques you’ve used to sell your books. Which ones have been most successful?

With Entwine, I didn’t know what I was doing. I was a complete newbie. But I found book signing events to be very helpful in marketing. Not only for the event itself, but the promos I could do around it, the pictures I could post on social media, and so forth. I also had readers post pictures of themselves on social media with my book and tag me. It became a “Where’s Entwine?” type of campaign that I started in NYC when I had my book launch in New York. I took Entwine on the subway, the MET, etc., and it started others doing the same. Entwine ended up in Australia, London, and all over the U.S. That was very successful because I reached the followers and friends of those who posted. For Raven, I’m enlisting everyone’s help to flood social media and it’s working!

6. Are there any marketing or networking techniques you’ve intentionally avoided or discontinued, and if so, why?

I haven’t explored ads yet. I’m not an ad expert and I want to make sure I utilize someone who has expertise before I drop a whole bunch of money into ads. I didn’t use BookBub for Entwine, because I’ve found it’s best when you have more than one book to sell, but I intend to look into it for Raven.

I also didn’t do pre-orders for Raven since I’ve found that Amazon doesn’t dump all the pre-orders on the sale day. They track them as they come in, so unless you have a lot of momentum to keep constant sales all the way up to launch day, you can dilute your sales day impact and maybe miss the best seller ranking opportunity.

7. What are the most important things you’ve learned about publishing that you didn’t know when you started out?

Agents need to know they can sell your book, otherwise they won’t pick you up. You might have a great book, but they don’t know where to put it on the shelf or they have too many authors writing that particular genre.

But I learned a ton about self-publishing by doing it last year. I learned about forming my LLC, ISBNs, keywords, discounts, the printing costs and pricing, distribution channels, organizations you can join to get discounts, etc. There is so much to know, but it’s important to be informed if you want to do this as a business. I have a full-time job and I’m also a writing coach, but I do treat my writing as a business as well. Eventually, I would love to write full time and coach other writers to achieve their dreams.

I learned to choose the book’s trim size through Amazon first and then match it to IngramSpark, my POD service. I did it backwards last time; I had picked a trim size that didn’t match Amazon and we had to reformat everything. I originally had IngramSpark providing the Amazon copies, but Amazon quickly “sold out” and forced me to upload a copy directly with them. I love Amazon, don’t get me wrong, but it can be a bit of a bear

9. New authors face the challenge of getting their books into the hands of readers. What advice do you have for an author just starting out?

My advice would be to start your social media platforms early. Start getting followers and start getting known for your brand. It’s important to have one as an author. Part of my brand is being inspirational, helpful, and supportive. That’s who I am and that’s why I grew my Twitter following so quickly. Also, make connections on social media through groups and, in my case, programs I took on coaching and mindset.

Whatever your interest is, take online courses because you meet people to network with that aren’t authors, but who are readers. And in many cases they are influential to new readers in their groups. You never know what connections you might make.

10. What other projects are you currently working on?

I’m just finishing up my writer’s retreat. Two of my writing buddies (I’ve been in a writing group with them for the past 15 years) and I will rent a house each year for a week and write a bunch. We also play some games, laugh a lot, and brainstorm. It’s amazing.

While I’ve been here, I’ve been working on Book 3 of the trilogy. I’m a pantser primarily with just a little bit of plotting, but I spent more time on Book 3 to get some major plot points down since it’ll be the anchor and ending to the first trilogy. My plan is to write a second trilogy with these three ladies if all goes well. Though in between, I’ll be working on that book for the agent I mentioned. It doesn’t hurt to have your options open and in several places.

Great question! Inspirational, fun, and hitting you right in the “feels.”