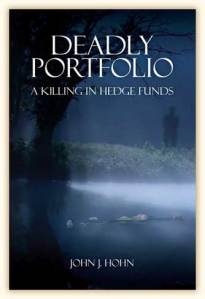 Author John J. Hohn has experience in marketing and sales that he’s been able to use, not only to drive plot, but to drive sales.  In this wide-ranging interview, John explains that background, as well as why he hired a publicist and why taking shortcuts can hurt indie writers.

I have published two books.  The first is a poetry chapbook entitled As I Was Passing By that I self-published in 2001.  I have been writing poetry since I was a boy and the time had come to publish a collection for my friends and family.

My novel, Deadly Portfolio: A Killing in Hedge Funds, was first published in the fall of 2010.  It was well-received by reviewers with established credentials on the Internet.  I began the book after retiring from my position as a financial advisor with Merrill Lynch in Winston-Salem, NC.  The book is the third novel for me.  The others are still in my file cabinet.  They represent my apprenticeship.

Deadly Portfolio flows out of my experience as a financial advisor, a position in which I had a unique perspective on the lives of my clients.  I came to know how they made decisions, how well they got along with their spouses, parents, and children, their trials at work or elsewhere in their lives.  I saw altruism and greed, generosity and miserliness.

The story is about four families and the tragedy that involves them all after one man, a financial advisor, bends the rules and makes an unauthorized trade in a client’s account.  His transgression sets off a string of events that ultimately claims the lives of three of the neighbors before Detective James Raker tracks down the killer and makes an arrest.

Sales have been steady.  I did not know what to expect at first.  I have sold approximately 500 copies, not including the Kindle version on Amazon.

3. What has been your experience with traditional publishing?

I tried to get an agent to represent my book for almost a year with no success.  I also sent queries to the few publishers who accept direct submissions.  I received a number of encouraging responses but no takers.

I should have done my research before I launched out.  Good information and help are available online to authors going the indie route.  Groups on LinkedIn and other dedicated sites have great people contributing and information available that will save time, money and heartache.  I made a serious mistake choosing Outskirts Press.  They priced my book too high for the market and did not participate in any discounting.  The result was that it was nearly impossible for me to make my book pay for itself.  I switched to CreateSpace and published a revised version in June 2011.  It also gave me the opportunity to make a few edits.

Ethical writers, publishers, publicists and editors are wonderful company to keep.  It is a fraternity, and like any other, it has its pretenders, but it reminds me of acting where the first rule of the unwritten code of conduct is you don’t knock the other guy’s effort.

5. You have a sales and marketing background outside of writing.  Tell me about the challenges of transferring those skills to marketing and selling your book.

I have a lifetime of experience in selling, much of it with intangibles like financial services and consulting.  In selling, it is essential to establish trust at several levels between the parties involved.  The prospective user of the service needs to develop trust in the competence of the salesperson as well as the salesperson’s intentions and propriety.  Those are qualities that are easy to project when the parties are dealing face-to-face.  It is much more difficult at the arms length on the Internet.  But everything matters.

The photos that a writer puts up on the Internet can shout things about his or her propriety and intentions.  Pretentious posing, lighting, and costume can be a turnoff to others.  I especially dislike seeing a writer use “author” as a title.

Competence is difficult to project also.  Writers demonstrate their craft in what they write promoting their work.  I am very conscious in writing this that I am going to be judged as a writer.  Poor grammar, word choice, spelling, and fractured syntax all communicate incompetence.  Propriety, competence, and intent is my mantra.  If I can work always at projecting myself in these critical areas and do so with integrity, then everything I learned about selling in my career eventually comes into play.

Ultimately, readers buy the author and not the book.  It may take longer to gain a following that way, but my bet is that my efforts will be more permanent.

6. You have hired a publicist as part of your marketing.  What was that like and what are your thoughts on publicists generally?

I decided to employ a publicist because I needed to get up the learning curve quickly.  It added to my costs, but it was worth it. Thinking long term, I feel that hiring a publicist was a good move.  He cautioned me against thinking that a huge increase in sales would result.  His value was in the focus that he gave my campaign, the supportive interaction with me, and multiplying my efforts to accomplish in three months what would have taken three years to achieve on my own.

7. What other marketing techniques have you used to sell your books, and which ones have been most successful?

I have tried a little of everything.  I have called on independent bookstores and put books on their shelves on consignment.  I have done book signings, created my own website, advertised myself as a public speaker, published articles on the Internet at sites other than my own and made myself available for interviews.  Nothing to date has been a runaway winner.  I probably sold the most books to people who know me – the guys I golf with, former working associates, clients, and high school and college classmates.  I am still feeling my way.  One of my most successful outlets is a corner variety goods store right here in my own hometown that handles books on the side.

8. Are there any marketing techniques you intentionally avoided or discontinued, and if so, why?

I have not ruled anything out yet.  I believed, in selling financial services, that one can never really determine the effectiveness of any given effort.  Stir on the right, stir on the left, and something happens in the middle.  A generous act or a kind word can be very far reaching.  Writers spend too much time selling to other writers.  I haven’t attended conferences and book fairs because of the costs involved.  I keep watching for evidence that they are worthwhile.

9. What’s the most important thing you’ve learned about self-publishing that you didn’t know when you started out?

There are no shortcuts.  Writers need to respect and utilize the talents and experience of copy editors and story editors.  It is expensive.  But one never knows the cost of a wrong decision or taking a shortcut.  What you don’t know can hurt you and in ways that you will never know because you will not be monitoring your losses.

I am working on a sequel to my novel.  When I get it to a point that I am most proud of it, I am going to get a story editor to give it the once over.  I am going to make my revisions and hire a copy editor.  Traditional publishers brought these professionals into the process.  Indie publishers need to do the same.

10. If you could do one thing differently in publishing your books, what would it be?

In many ways, the critical success of my book has been the fulfillment of a lifelong dream, perhaps even a quest.  If I were to do it again, I would hire a professional story editor and then a copy editor or proofreader.  They are critical if a writer wants an artistic success.

11. Independent authors face the obvious challenge of marketing their books without the resources of traditional publishers.  What advice do you have for an indie author just starting out?

Slow down!  A writer comes out of the gate all charged about having completed the work, enthused about its acceptance among early readers, and pumped by fantasies of TV appearances and over-the-top sales.  But it’s a lottery!  A writer can have the next classic in American literary history, and it can fail to ignite a following.  Writers walk the line between needing to hear what qualified, well-intended critics are saying and maintaining justified pride in what they have created.

12. What projects are you currently working on?

I am working on three novels currently and continuing to tap out the occasional poem.  The critical acceptance of Deadly Portfolio has convinced me that a sequel would also be well-received.  I have another thriller on the front burner in which Detective James Raker finds himself in the middle of a series of murders within a homeowners’ association.  He moves out of his grief over his wife’s death from cancer and begins, at age 62, to date again.

For years, I have plugged away at a coming-of-age novel about growing up in the 1940’s in the Midwest.  Tom Brokaw, who graduated a year behind me in high school, did a great job on a book on the same subject.  But my experience as a Catholic kid was a couple of shades darker than his in a lot of ways.

Finally, for several years, I was a salesman for a company that produced sales and management training programs.  The job had me in front of audiences all over the country as a motivational speaker.  My novel, tentatively entitled Keeping Pace, is about that experience and the disillusionment that the central character experiences when he realizes that he may just be to capitalism what Elmer Gantry was to the world of faith.

13. If you could market your brand – not just one particular book, but your overall brand of writing – in one sentence, what would it be?

You’ll like this guy because he’s bright and approachable.

There is a lot of press given to building a “brand,” in the indie publishing world.  I tend to distrust that approach because it suggests that a person project a façade of how he or she wants to be perceived.  The best image to project is the true image.  “Brand,” in other words, follows rather than leads a promotion campaign.  I would hope that I am regarded as sincere, thoughtful, open, generous, and creative.  All modesty aside, I think that is the man I am when I am at my best.  And that is how I want to be perceived.

14. How can readers learn more about your books?

The best place to stay in touch with me and learn more about my books is my web site, here.