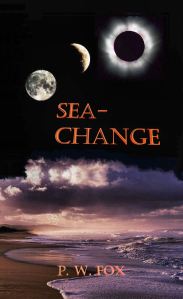 Paul Fox is a science fiction and fantasy writer who stays busy with new writing projects.  Paul explains why he has avoided using press releases and instead focuses his marketing campaign on email and social media.

I have a quick-read fantasy novella, Sea-Change, that’s available as an e-book or paperback.  It is the story of a young bride-to-be, betrayed by her fiancé, who escapes her captors and makes use of ancestral lore to change her dismal fate and seek revenge.  By invoking the ancient powers, she becomes, in fact, the son her father never had.  But she has only two weeks, until the time of the new moon, to get back to her home country and confront her betrayer before the spell ends and she becomes a woman again.

My initial motivation was to publish a small collection of poetry, which is a hard sell by the traditional routes.  I wanted it available to present as a surprise Valentine’s Day present to my wife.  This first book was only available in PDF format, but I learned enough from the process to encourage me to self-publish again in 2011.  This past year (2011) I expanded that first book of poetry and published it as a second edition.  Further, I had a novella-length story that proved to be too long for most magazines and too short for traditional book publishers, and so self-publication seemed to be the answer.  To date this has been, I think, a good choice.

3. Have you been traditionally published?

No, I haven’t, at least not yet, been traditionally published; not with book publishers at any rate.  I do have a magazine credit as one of 14 authors who collaborated on a story-in-the-round that appeared in the Jan-Feb-March 2010 issue of Golden Visions Magazine of Science Fiction and Fantasy.

The best part is that you know where you are in the process at all times.  I’ve also had to learn a lot about such things as: book and cover design; e-book requirements and distribution strategies.  And then there’s the marketing.  Overall I like the control one has over the final product.

The main marketing techniques that I have used to date are email and social media.  I don’t have specific numbers that give me the data on which produces the most sales, but from personal contacts I have received more comments about the emails.  The social media channels that I use are Facebook, LinkedIn and Twitter.

The major marketing technique that I have avoided is the use of press releases, mainly because I feel that I personally lack the knowledge to use them effectively and don’t have the financial resources to hire a pro to do it for me.  It’s an aspect that I’m working on, however.

I don’t think I realized just how complex the job of getting a book out is.  I’ve done three books and I’m still learning.

There isn’t any one thing that comes to mind.  Each book has presented its own set of challenges, and I’m still learning as I go

I’m currently working on a science fiction novel, Starcrossed Legacy, about two-thirds complete, and a poetic fantasy, The Last Wizard: A Metaphysical Journey, first chapters.  I’m also beginning an outline for a novel-length sequel to the novella, Sea-Change.  This sequel is as yet untitled.  I’m also finishing a short story titled Bleeding Frenzy.

My books are fantasy and science fiction adventures with thoughtful characters and intriguing plots.

The best way readers can find out about my books is to visit my web site pwfox.com.